Hello everyone – Welcome to a New Year of Retire and Enjoy.  I took a short break from blogging over the Christmas period but am now back and ready to start catching up with you all.

First off what happened to my last year’s resolutions?  Did you make any?

I checked up on my last year resolutions and have to admit to some of them falling by the wayside very early on, like practicing the piano every day and completing a book about my alternative lifestyle.  The book has some draft chapters but the piano has been silent for quite a while.  Therefore, no New Year Resolutions for me, I’ll just try to catch up on those ones still outstanding.  Some of you may recall that at the beginning of 2016 I put forward the idea of a “to achieve list” which still seems a good idea so here’s the list again in case you missed it last time.

Now I know that not all my readers are interested in spinning but for those of you who are, I just have to share a couple of photos of the wheel and drum carder Ken bought me from Holland.  The wheel certainly isn’t traditional in appearance.  It’s named Bliss and is truly bliss to operate.  The carder is a Hero and has become my right hand for preparing wool to spin.  I love them both. 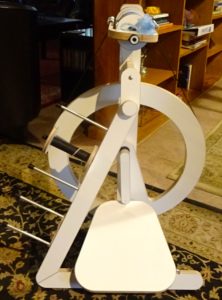 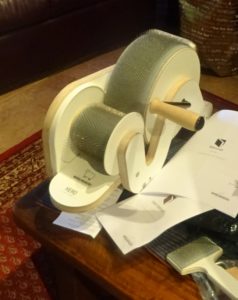 The Bliss comes in a ‘flat-pack’ and is really easy to assemble. It took Ken about 1½ hours to have it up and running.  The total price for buying both the wheel and the carder was less than the cost of a wheel here in Australia plus postage included.  Here’s a link to their site http://www.woolmakers.com.  I have searched YouTube for a demonstration video and the following is the best I can come up as the majority are not in English.

Do you ever take an afternoon nap?

So far I’ve never found it necessary to take an afternoon nap but now have to admit to sometimes feeling quite sleepy in the middle of the day.  I remember my Mum and Dad always settling down for a nap after lunch and I never thought that could happen to me.

Researchers at the University of Pennsylvania found a short sleep in the afternoon improves people’s thinking and memory skills and makes the brain perform as if it were five years younger.
The team studied 3,000 elderly Chinese people and looked at whether those who frequently took afternoon naps performed better on mental ability tests.
Scientists found people who took a nap after lunch did better on the tests than those who did not sleep in the middle of the day.  In total, 60 per cent of people in the study slept after lunch, with the average nap time being 63 minutes.
The study suggested an hour was the best length for a nap; people who had longer or shorter rests performed up to six time worse on the task so taking an afternoon nap of the right length is so beneficial that it has the same effect as being five years younger.
Many people in Europe take a regular afternoon nap or siesta and it is part of their culture.
Apparently Sir Winston Churchill said “Nature has not intended mankind to work from eight in the morning until midnight without that refreshment of blessed oblivion which, even if it only lasts twenty minutes, is sufficient to renew all the vital forces.”
What are your views? Do you ever take an afternoon nap? If you had the option, would you like to have a nap during your day?

A look at my Sunflowers

I planted my Sunflowers facing north so that I could enjoy them as I passed by on my way down the garden each morning but I was sadly disappointed when their faces turned to the north east providing me with a view of their backs.  However, they are magnificent plants 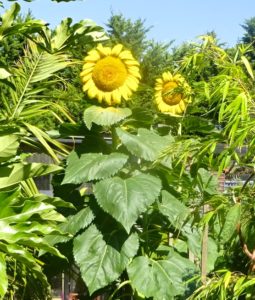 so it’s worth a detour around another path to enjoy them.  A simple pleasure!

Here’s a simple recipe for adding a sparkle to Cauliflower.  I’ve been using this recipe for years so not sure of it’s origin but it always tastes so good.

ROASTED CAULIFLOWER with a coating of chopped parsley, breadcrumbs, garlic and olive oil.

METHOD:  Preheat oven to 180C.  Cut cauliflower into large, similar sized florets.  Lay on a baking tray and drizzle with 50ml olive oil.  Toss and sprinkle with salt.  Bake in the oven until brown and just soft – about 30/45 minutes.  While cauliflower is in the oven heat a frying pan with olive oil, add the garlic and breadcrumbs and stir for a minute, then combine with the parsley.  Remove cauliflower from oven, after cooking time, and scatter over the seasoning mixture.  Return to the oven for another 10 minutes or until crisp and lightly golden.

Ken has always been a fan of jigsaw puzzles but gave them up when we moved to a house with less space.  Then he found Magic Puzzles to download from the net and installed their Free Puzzle a Day range on our pads.  Now most evenings after tea we challenge each other to see who can finish the 280 piece puzzle first.  The puzzle picture is a mystery so you have no guide to follow.  This probably sounds a bit childish but having a little competition really is fun and I highly recommend it.  There’s something exciting about trying to win and it keeps you alert and on your toes so to speak.  Ken often beats me;  he seems to have a better idea of collecting colours but when I manage to beat him I shout out “finished” which brings a frown to his face but makes me very happy.

Of course you can challenge the clock if you are doing the puzzle without a companion.  An average puzzle takes just under an hour though some have been really difficult and have taken a couple of hours.

I hope you are all selecting different projects and challenges for the year ahead.  They don’t have to be large but will give you something to strive for provided you remember:

YOU CAN DO ANYTHING BUT NOT EVERYTHING