Hello everyone – a month has slipped by since my last post and although I always intend to write more often, I just looked at the calendar and realised I’d failed to put pen to paper so to speak.  Lots of things have been happening, one of which is that I have been elected President of the Coal Creek & Fibre Arts Group after the sitting President had to sadly resign due to the ill health of her husband.  I hope I will be able to do justice to the task and fill her shoes admirably.  When I mentioned this to her she said I may have a hard job as she took size 11 to which I replied that I took size 11 too.  Mmmm I’m not sure what this means, is it an omen !

Firstly I would like to share with you a short story that I heard the author, Ken Stokoe, read on Radio National Life Matters recently.    I am sure if we thought about it many of us could write our own love story with a happy or sad ending.  Unfortunately this story has a sad ending though it does reflect life’s journey so I hope you will enjoy it as I did.

It’s not about Verona, not Romeo and Juliet; just about Balmoral Beach and us.
An early Saturday afternoon 70 years ago.
She just free from work, I to the city from my working-class home in an outer suburb. We to meet and spend the rest of the day on an outing. There was a pack of sandwiches she had brought – sweet-corn filled. The first I had ever tasted. So delicious. How long had this been going on, I pondered?
That taste followed the ride from Wynyard in a very swish corridor tram with padded seats to Balmoral Beach. The first time there for this unsophisticated teenager.
It was a great adventure, crossing the harbour by the mighty bridge, another first, to rumble through posh streets of elegant houses such as I had not seen hitherto. Then down winding cuttings in the sandstone to a golden sand strand and a sparkling sea.
What a thrill, what revelations.
The lunch taken on a lawn in the beachside reserve under a clear blue sky, the air tempered by a soft breeze.
Presently, a stroll along the shore towards an adjacent islet of rock. I was so elated by it all that I shyly took her hand in mine. Things of this nature must have developed slower then than now. Certainly did for this couple who, although companions for many months, had never made so bold a contact.
How sweet it was.
Her hand so soft and smooth. Everything about her perfect; so pretty, so learned, so kind, so thoughtful.
A dog came bounding up, its tail wagging, as mine might have done had I possessed one. It dropped a stick at our feet, then dabbed at it with paw while gazing expectantly into our faces. Quite obviously dog-speak for “Let’s play”.
I released her hand, took up the stick, hurled it into the bay. The dog swam to the stick which was brought back to our feet to soak lower limbs with the water shaken from its shaggy coat, seeming then to grin as if to say, ‘What fun is this!’. The game continued. 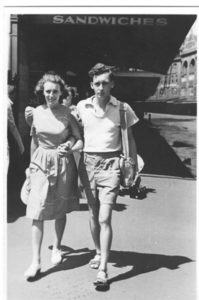 Although I was joyed by the whole outing thus far, I did not take her hand again. Later, I came to realise she was not so pleased and did not share my attitude to the friendly dog. Much later, approaching marriage, I was told how cross she was when the dog caused the unclasping of hands, was disappointed that the holding of hands did not resume that day.
The years of marriage, though at first financially stringent, were idyllic.
Three daughters and Mum a girlish quartet. In the early years, we combined to nail together a ready-cut house. It is another tale of how the extensive backyard became a miniature farm. In time, the daughters branched out on their own.
We became Darby and Joan, had paid off the home loan, were in the ‘Golden Years’, but knew that someday it would end in death and grief. There would likely be a great price to pay for the happiness we now enjoyed.
And so it was.
She was diagnosed with an incurable terrible disease.
The closer the end approached, the greater grew our love. We mourned together through those months.
Two broken hearts, shattered. Not the mere bruised heart of all those years ago, irreparably broken hearts.

Wiping away the tears and putting away sobering thoughts, have any of you been undertaking new or challenging projects recently.  For over a year now I have been very interested in all things felt, reading about it’s origins, production and practicing the art.  I have turned my hand to making flowers, vessels, scarves and more recently hats.  When I read about a Russian lady, Irina Spasskaja, who had developed a unique way of laying out Merino wool fibres to create a soft hat with a double brim, which at the same time was water and wind-proof, I had to investigate further.   This culminated in my purchase of her 6 video tutorials (rather costly) followed by many hours of practice and the necessity to have a rotary board made to facilitate the work.  This was achieved by purchasing a ‘lazy susan’ base and then going to our local carpenter wiz, Gary, who goes by the rather strange name of DUCKS GUTS FURNITURE, who luckily had a circular piece of wood in the corner of his work room, ideal for the task, and within 24 hours I had my rotary board for the grand sum of $30.  Amazing.  Here’s  a picture of Irina showing her rotary board which I copied with the help of Ken of course. 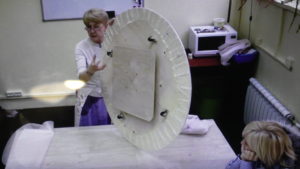 Irina showing the rotary felting board

I won’t bore you with all the technicalities of the process except to show you a few photos of how the layout works.  If you would like more details send me an e-mail ([email protected]) and I will be happy to supply a fuller description of the process. 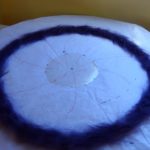 First layout with template for opening 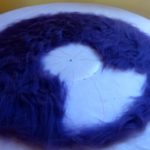 Fill in at 45 degree angle 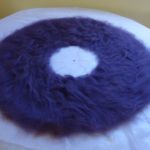 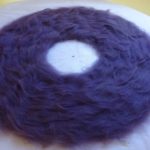 Reverse side – no opening

Now after nearly 5 hours of work here’s the completed hat: 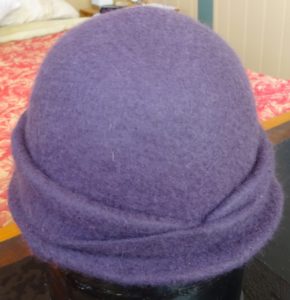 Irina says you have to make at least 10 hats before you are ready to progress to the next level of expertise.  I think that could be sometime in the future for me.   One hat is a huge task.

As many of you who are volunteers will know, this week has been National Volunteer Week with lots of activities and afternoon teas around the countryside.  I celebrated by attending my local neighbour house and participated in a group session of laughter.  We were told how laughter is beneficial for us whether it be real or false.  We had to walk around the room making eye contact with each other, clapping, repeating hehehehe, hoooo,  and making various movements, like simulating knitting, driving, digging and so on.   Yes, this did cause laughter amongst many of the participants but left me with a silly false smile on my face.  At least I did’t sit out like some, but I really didn’t enjoy the experience.  Have any of you tried this activity I wonder.

At the end of the session different messages relating to volunteering were read out, this one says it all for me.

Volunteering can be an exciting, growing, enjoyable experience.  It is truly gratifying to serve a cause, practice one’s ideals, work with people, solve problems, see benefits and know one had a hand in them.

I am at last getting to the end of my abundance of apples, well almost, and in my quest to process the last few kilos found the following recipe which turned out really well, though for me the topping was too sweet, so I would suggest you reduce the amount of brown sugar a little if you don’t have a sweet tooth.
Aunty Wendy’s Apple Cake 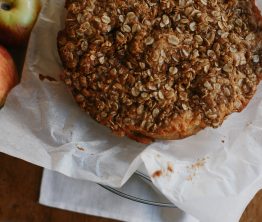 What do you think of this marvellous Birthday Cake produced by the sons of Christine (retired President of the Coal Creek Spinning Group) for her recent birthday?  So appropriate and so clever: 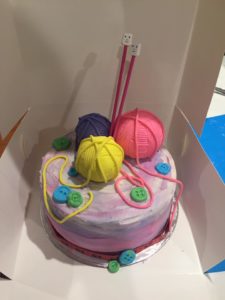 I’m going to finish of this post with a bouquet of felted flowers produced by the participants at a recent workshop: 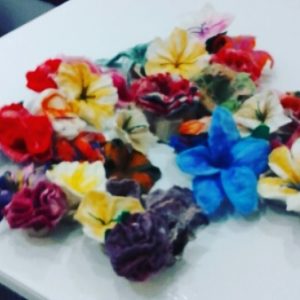 Until next time, enjoy every day.