I just can’t believe where the past few weeks have gone.  I made a resolution to post at least every couple of weeks but despite my good intentions, I’ve failed.  I recall a sign on the wall of the office where I had my first job at the age of 16:   The secret to a happy life – never argue, never explain.  This sign was pointed out to me on many occasions by the Office Manager when I wasted too much paper failing to erase errors in my typing.  Though I’m not sure I agree,  it’s stuck with me for a very long time.

Sometimes impromptu days out can be the best

Do you sometimes wake up one morning and say to yourself or your partner “let’s go out for the day’ ?  These impromptu days out can prove to be the best.  That’s what happened last week when I woke up and thought blow all the jobs I had planned, the weather forecast was for a sunny day, so why not go out and enjoy.  Ken had read about filming waterfalls and suggested we go to Agnes Falls Scenic Reserve which is located in Gippsland around a 15 minute drive from the township of Toora and about 1¼ hours from our house (2 hours from Melbourne).   I packed a picnic lunch and we were off.

When we stepped out of the car at the falls there was a feeling of absolute tranquility.  Just standing in the peace and quiet was exhilarating.  Here’s a link so you can read more about the falls.    https://www.visitpromcountry.com.au/attractions/agnes-falls

When we got home Ken put a short film together so I could include it in this blog.  It just gives you an idea of the Falls but unfortunately not the rest of the beautiful surroundings.  You may need to turn your sound down when viewing as the water falling is really loud.

A time for reflection

A couple of weeks ago it was our 56th Wedding Anniversary.   The whole family met at our daughter’s house to not only celebrate our Anniversary but the birthday of our son and two of our grandchildren.  I  retrieved our Wedding Album from the back of a cupboard to take to the party and after tea and a very large cake, we sat around a huge table to chat.  The grandchildren talked about their courses and activities and future prospects, our children chatted about their jobs and hopes and Ken and I listened and reflected on our lives.  The album was passed around with much laughter.  It was so good to remember that special day 56 years ago and bring to life aunts, uncles, parents, grandparents and friends who will forever be in our hearts. 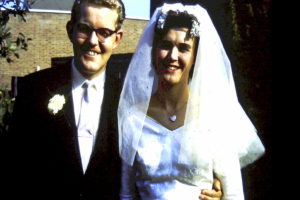 Is your wardrobe in a mess?

The answer to this question for me is, yes, so when I read a plan for change, I thought I would have a go:
Sort the clothes you don’t wear. Store these out of sight until you’re ready to donate or discard them.
Set a limit. Determine the number of items you’ll have in your wardrobe, be it a core 10 or wider 33 or in between.
Set a time. Decide how long you’ll wear your capsule wardrobe. One to three months is a good starting point.
Curate your clothing. Replace ill-fitting or well-worn items as needed.
Enforce a one-in-one-out policy. When you buy a new item, donate or toss an old piece.

I wonder if it will work !!

With warmer days on the horizon (I hope) here in Victoria and the sun still shining in the UK, this recipe is a winner.

1. Heat the oven to 350 degrees
2. Heat ½ cup of olive oil with butter together in a large oven proof skillet over medium heat
3. When butter has melted, remove the skillet from the heat, add garlic and bread and mix it well
4. Transfer skillet to the oven and bake for 15 minutes until the bread is golden brown, let it cool down
5. In the meantime prepare the tomatoes, cut the cherry tomatoes in half or if using large tomatoes, core and slice into medium cubes
6. In a large bowl, mix together, tomatoes, cucumbers, onions
7. Combine vinegar with 3 tablespoon of olive oil, salt and pepper and pour over the salad
8. Mix well
9. Add bread and herbs and toss everything together
10. It can be served immediately or prepared 15 – 30 minutes in advance

In my last post I mentioned that I hoped to make up an easy to use kit for wet felting with children.  This turned out to be a much bigger task than anticipated but eventually I was able to source all the bits and pieces necessary and now have the kits ready to go.  I tried to photograph the actual kit, but the bag caused a reflection so this is the label. 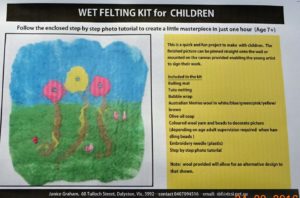 My next challenge is to do a filmed tutorial with two of my granddaughters and post it on YouTube.  They haven’t felted before so it should be a good test for the kit.