Hello everyone, here I am with a few snippets of interest to share with you once again.  Before I start a post I always ponder over different articles I have read, ideas that inspire me, projects I have undertaken and all matter of other things, hoping you will be able to pass some pleasant time reading those things that interest you.
First I‘m going to start off describing an article I read in a recent copy of Spin Off, the art & craft of spinning yarn (an American magazine).  Lynne Rule became a paraplegic some 8 years ago and with the help of her husband has founded the Healing Fibers Foundation.  She says there was little she could do to fill the gruelling days and endless nights.  It was then that her concerned husband remembered that she used to knit.  He purchased every needle size he could find along with bundles of yarn and gave them to her for Christmas.  From that gift the beginning of Healing Fibers emerged.  The mission of the organisation is to encourage those who are ability-challenged, those struggling with illness, whether physical, emotional, mental or stress-related, and caregivers to use traditional fibre arts as a means of non medical therapy, focus and relaxation and to aid in the ability to be productive.  She says so may times these people are overlooked or minimalized when they have so very much to offer the world.

I was really quite overwhelmed by this article, the whole details of which are too long to précis here, but what a wonderful concept and one which I think we could employ if we see the need.
For more information you can go to their website which is truly amazing:  http://www.healingfibres.org
Turning a cooking failure into a treat for Ken
I bake bread each week but l decided I would make a sourdough starter for a change in addition to the usual mixture.  The starter fermented well over 4 days so I thought a fruit loaf would be nice for a change.  The loaf looked magnificent 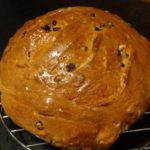 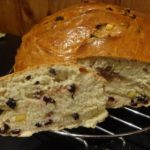 but o’h dear it was so gluggy and didn’t improve much with toasting.  I couldn’t bear to waste it so ‘ding’ I came up with the idea to give Ken a real treat.  Back in the dark ages, mmmm 1953, Ken was in training for his National Service in the Army and when he came home on leave his Mum always sent him back to camp with a bread pudding in a tiny suitcase.  He tells me he kept that suitcase for years as it still had the aroma of the pudding and brought back so many memories.
OK, back to the treat.  Of course over the years I’ve made bread puddings but certainly not recently.  If you’ve made one yourself you’ll know you don’t need to use a precise recipe and you can use any type of bread you have to hand.  In case you want to have a go here’s a rough guide:
1 large loaf, preferably fruit, but you can add more fruit
as required. The bread can be white or wholemeal or a combination.
Soak the bread in sufficient water to cover.  Leave for about half an hour then drain off the water and squeeze to mash.  It will be quite wet.  Add additional dried fruit at this stage.  If you use plain bread then probably about 200g will do though more or less doesn’t matter.
Add 140g light brown or raw sugar, zest of a lemon, good pinch of mixed spiced and cinnamon, 100g melted butter and 2 beaten eggs and stir to combine.  Line a large oblong tin with baking paper and pour in mixture.  Bake at 180C for around about an hour but check after 40 minutes to make sure pudding isn’t browning too much.  It should be firm to the touch.  Leave to cool, sprinkle with some white sugar and cut into squares.  Best eaten warm (not hot) or very yummy cold.
As you can imagine Ken was very happy even more so when he tasted the pudding: 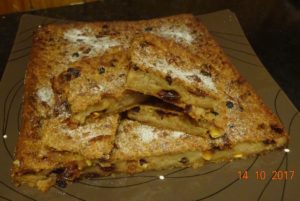 The pudding keeps well in the fridge.  There’s no way it can be eaten all at once !!
Sewing with certified organic materials
I love sewing with certified organic materials and I’m prepared to pay that little bit more knowing that the grower of the fibre has been certified by an independent authority.  Some time ago I purchased some Australian made certified organic jersey knit from Bloom Fabrics in Melbourne http://www.bloomfabrics.com.au
It’s been sitting in a drawer for some time but when I was given a beautiful skein of wool as barter for a felt hat I made for a colleague in my spinning group, I knew it would compliment the dress I was intending to make by way of a belt and cuffs for the sleeves.  This weekend I got started on the project and true to form I experienced the presence of my dear Aunt Helen who taught me to sew and always insisted that preparation was the key to success.  Hence the material being jersey it was necessary to stay-stick all the edges.  I was a very good girl and reluctantly followed Aunty’s instructions after which I lay out the prepared work with the crochet of the belt to see the effect.  I think it’s going to work well. 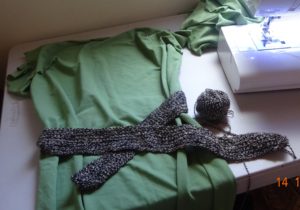 Way back  in November 2012 I included in my post a little about my Aunt Helen and the big part she played in my life during my youth so thought today I would include a link to one of my short stories THE INTERVIEW telling how she helped me make an outfit for a very special interview. Of course some of you may have read this story before.
the_interview
Nature at its finest: Colombia, biodiversity and the power of nature

This is a story that you don’t expect to read when someone mentions Colombia.  It’s usually about drugs isn’t it, so when I came across this article while participating in a Spanish language course, I was truly amazed.  When I mentioned its contents to Ken he gave me a funny look because he sometimes has the opinion that I’m ignorant of the wonders of the world.  Well, he has a vast knowledge of the south americas, being very interested in fauna and flora especially bird species, so I’ll leave him to his scepticism about me !!

Colombia is a country favoured by its natural resources, the variety of its geography and diversity of its ecosystems. It has a great variety of mountains, glaciers, volcanoes, plateaus, valleys and savannas. There is also a considerable number of streams, creeks, rivers and lakes in the country, which contributes to its thriving biodiversity. Ecosystems, species and genetic diversity together form the complex concept of biodiversity that is vital to the survival on this planet. Behind Brazil, Colombia is the second-highest country in terms of biodiversity, home to more than 56,000 different species, 16% of which are only found within the country’s borders.

Covering only 0.8% of the earth’s surface, Colombia hosts 18% of the 10,507 known bird species and around 60% of the bird species found in South America. With nearly 2,000 different bird species, the nation is the first in the world when it comes to the number of bird species. It is also home to 479 mammal species, 534 different kinds of reptiles, 763 amphibians and 3,435 different types of fish. There is an estimate of 300,000 species of invertebrates in the country of which only 10 to 20% have been studied. Among them, we can refer to more than 3,273 kinds of butterflies, 900 types of ants and more than 7,000 different classes of beetles. Among those species exclusive to Colombia we can name the American flamingo, the Andean condor, the Andean poison frog, the harlequin poison frog, the indigo capped hummingbird and a number of colourful monkey species and some incredibly beautiful butterflies.

Colombian biodiversity is at risk, with around 1,500 species reported to be on different levels of extinction risk. This is caused mainly by urbanization and overexploitation of natural resources. These blooming ecosystems may seem permanent, but they are actually susceptible to collapse.

I’ve come to the end of my post for this time.  I hope you are all enjoying pursuing your various projects and activities and because it’s Spring here in Australia, I’ll leave you with this quote:
A flower does not think of competing with the flower next to it, it just blooms

2 thoughts on “Healing with art and craft: Turning a cooking failure into a treat: Sewing with certified organic materials: Nature at its finest; Colombia”