It’s amazing how we are able create happy and rewarding memories intentionally or otherwise by past actions.  One memory which I am able to enjoy every day, had its roots 10 years ago when my grandchildren came to stay for a weekend and I needed an activity to amuse them.  I recall browsing through various books and magazines where I saw some painted totem poles and thought what a good project that could be.    I knew Ken had some poles behind the garden shed and I had various sample pots of paint and so the idea became a reality.  It turned out to be a fun weekend, very messy, some tears, much laughter and best of all I still have those poles in the garden.  They have moved location over the years as the garden has changed design and the colours have faded but now they are outside my living room window, so every morning when I draw the blinds there’s my happy and continuing memory of my lovely grandchildren painting and placing their hand prints on those poles. 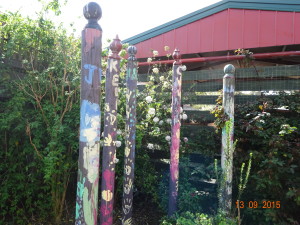 Another memory  is of my mother participating in a drawing class at the age of 90.  In her effects after she died I found a couple of her pictures one of which was of a window in different colours.  At the time we were in the process of building a small mud brick cottage and I had the concept of having the drawing used as a pattern for a lead light window.  The chap who did the work for me reproduced the colours exactly and installed the window half way up the staircase.  I feel my mum’s light shines through that window and gives me great joy as I pass by it each day. 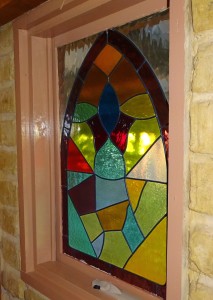 Since Ken joined the Movie Making Club and set out on a quest to make a film of how printing had changed from the days when he was a Compositor up until the present time,  we have embarked on some very unusual adventures.  Ken needed to find a letterpress machine that was still operating and he located someone  on the internet with a company called Printing Museum Pty Ltd.  He phoned and had an in-depth conversation about printing methods and the chap said he had all types of machines, some still operating so Ken made arrangements to visit.  It was right out in the country up in the hills, necessitating us to stay away overnight.  When we looked at Google maps I thought it was an odd place to have a museum and I mentioned this fact to Ken who said not to worry.

It took about 5 hours drive to get there. We went round and round these narrow roads until we eventually came to a derelict pub and post box. There was a man collecting his mail so we asked for directions. He told us where to find the place but said “he’s a weird bloke”. Eventually we came to this really run down row of houses, most with wonky roofs and planks falling off.  The chap we had spoken to earlier drove by, stopped and said ‘that’s the place’. Ken got out of the car as a man emerged from one of the buildings and introduced himself as Kerry and told us to go further along the road and through a farm gate. Well, there was rubbish everywhere. Great first impression. I said to Ken, ‘I’m not going in there’. Anyway Ken sets off with Kerry and was gone for nearly 2 hours.   I started to wonder what had happened to him. Fortunately I had a book with me.   When Ken returned he said Kerry did in fact have printing machinery and equipment but none of it was in working order and it was all going rusty and was impossible to film. It was all packed into these falling down houses.

Kerry told Ken he wanted to set up a tourist facility and was hoping for Government assistance.   Poor man, what wishful thinking.

We came down from the hills and stayed in a small cabin by the side of the river which was really pretty and tranquil though the weather wasn’t that good. What an experience and a real talking point.

Not to be deterred, when we got home Ken set about surfing the net in search once again of someone with a letterpress machine and came up trumps finding a man in Melbourne printing authentic looking tickets for trips on tourist trains such as Puffing Billy.  We were invited to visit and Ken came away with some great footage of a machine in operation.  I will post his film when it is complete.  Goes to show perseverence pays off.

I recently caught up for a coffee and chat with a friend who had been on holiday to Alaska and various other destinations.  Her trip sounded absolutely amazing.  Enjoying good company, sharing experiences, chatting about adventures and plans for the future is so uplifting.

It might inspire you to visit South America or think about learning Spanish.

Spring is coming to Australia

I am very excited to have a new camera.  Ken said that the one I was using didn’t have enough pixels to do justice to the pictures I wanted to take so he bought me one that he considered would do the trick.  Well, I’ve started snapping away and will finish off this blog with my first efforts, Spring coming to the garden: 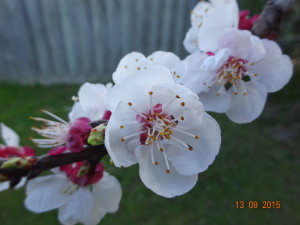 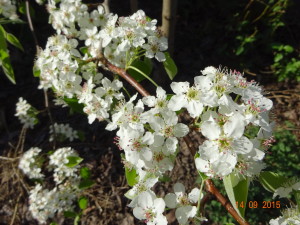 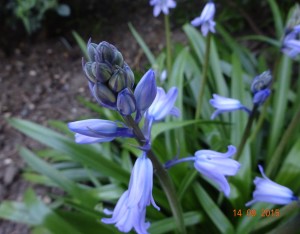 I wish you all well and hope you are filling your days enjoying retirement or planning for when that day comes.