The not so retired retirees

Recently I have been thinking about what it means to be retired.  Our generation is known for a strong work ethic, but I’m not sure we could keep up with some inspirational seniors, who still work full time even in their 90s.  Apparently recent studies have shown that as you work past 65, your life expectancy increases.  Here are the three not so retired retirees I read about recently.

Beanham’s Melbourne motorbike parts store has been a fixture of Elizabeth Street for more than four decades, and the 92-year-old has been there through it all. Her 38-hour work week runs from Monday to Friday plus a half-day on Saturday. “I don’t like holidays,” Beanham says “When you get old, you need your brain working.”

This amazing teacher really is 102 years old.  In fact, she has officially been named America’s oldest living schoolteacher. Affectionately known as “Granny” by her pupils, Zhelesnik only began teaching at the age of 81 and still works 35 hours a week at the Sundance School in New Jersey. “I’m busy every minute,” she says.
Reginald Huntley, 96

This British grandfather works 40 hours a week, travelling around Kent in the UK selling woollen clothing and accessories. Rising at 6 am every morning, Huntley works 9 to 5, Monday to Friday. In an interview with Mirror Online, he says, “I hate the thought of sitting at home because people deteriorate.” As for what keeps him going? Huntley visits the gym once a week and loves a good meal of “meat and two veg.”

These three obviously really enjoy what they do, but likewise changing your lifestyle after retirement can open up new challenges and opportunities.  Retirement doesn’t actually mean that you stop work, far from it.  There is time to pursue those things you have had in the back of your mind to do if only you had time together with other activities you never thought it possible that you would enjoy or try.   As we age everything has to be tailored to suit our abilities and needs, but through our local clubs, community houses, libraries, on line courses of every category etc. there is something for everyone to help you retire and enjoy to the full.

More years ago than I care to remember, possibly in the 80’s during my alternative lifestyle era, I had a go at soap making.  I recall writing to tell my mother back in UK all about it.  I quickly received a reply from her saying that if I couldn’t buy soap in Australia, she would send me some.  Anyway when I saw a Goats Milk Soap Making course being offered at my local Community House, I booked in.  With all the so called “natural” soaps on the market, I had the mistaken idea that it was possible to produce soap without the use of lye, apparently not so, a fact the course leader acquainted us with at the start of proceedings.   All real soap is made with lye (sodium hydroxide mixed with liquid).  However with the chemical changes that take place during the soap making process, namely, saponification, the finished product does not contain lye.  If you would like to know more about these facts, check out Wikipedia.

I have to say it was a very enjoyable morning with much laughter and chatter.  After having the process demonstrated, we were divided into groups of four, provided with the ingredients which consisted of goats milk, solidified oil, copha, vegetable oil and caustic soda (lye) plus our choice of essential oils, clays, colours or abrasives together with the necessary utensils, following which we set to work with varying degrees of success.

So far I haven’t practiced at home.  We didn’t add any colour other than clay during the course and I thought the finished product looked quite grey and uninteresting, although having used the samples we were given, the soap smells and lathers really well and is soft on the skin.  I have written to the course leader to obtain some more advice. 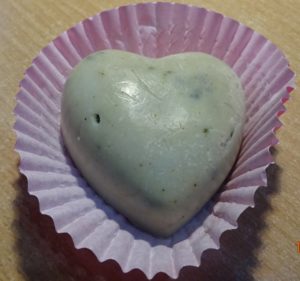 If anyone would like the actual soap recipe and instructions, I’m happy to send you a copy.  Just drop me a line at [email protected]

Having joined a Spinners group some months ago, I have been practicing my technique under the mentorship of Joan, a long time spinner with 15 years under her belt.  I really do appreciate all her help and advice.  In fact all the members of the group have been fantastic.    Believe me it’s harder than you ever imagined.   Having eventually got to the point where I could spin ‘reasonably’ well,  I decided I would like to start from scratch, washing a fleece, drying, preparing for spinning (carding), then eventually spinning, plying and knitting a finished article to wear.

Without going into too much detail, I thought I had the wool ready for spinning and took it to show Joan, who on inspection kindly said “it will make really good stuffing”.  Apparently I had pulled the fleece in all directions instead of in the way of the staple (direction which the wool grows) which would cause lumps when attempting to spin a smooth thread.  I had so much to learn.  However, over the next few weeks I watched some YouTube spinning videos and saw one  lady who spun absolutely anything and everything.  Out came my wheel and ‘stuffing’ together with some bits and pieces of coloured wool my friend brought back from Chile and I set to work.   Yes big lumps and bumps did emerge, breakages frequently occurred,  but undaunted I spun on and eventually had enough to make a small circular scarf.    Here’s my finished article which I’m quite proud of and wear frequently. 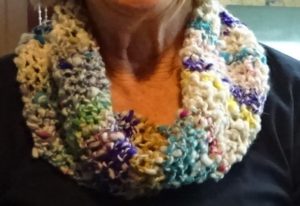 A few useful tips for using Cream of Tartar

I was reading an article recently about the varied uses of Cream of Tartar and thought I would share a few of them with you.  I realise of course that you may already have them in your repertoire but if not you may find them useful.

Stain Remover
Make a paste of cream of tartar mixed with lemon juice to lift stains on clothing and carpets. Let the paste sit for an hour or two, then either machine wash as usual, or blot with a damp cloth. This mixture works well on ink stains!

Kitchen Cleaner
Make a paste of cream of tartar mixed with white vinegar to make a great all-purpose kitchen cleaner. Use it on burner pans, grout lines, ovens, sinks, and to clean up mould and mild

Coffee Pot
Clean stains and residue out of your coffee pot by sprinkling cream of tartar inside. Add boiling water to fill the pot, let the pot cool to room temperature, and rinse well.

I’m going to finish this post with a happy story.  I can’t imagine riding around a busy city like Lima in Peru on a bicycle but what fun – enjoy. 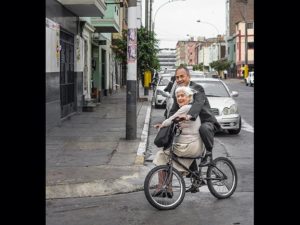 On May 23, 2016, photographer Jean Paul Merino posted photo to a Facebook community page for aspiring and professional photographers. Today the photo, titled “Tercer Juventud” (Third Youth) has over 1,000 ‘likes’. Here’s the photographer’s story behind the spontaneous image that would capture hearts (and thumbs up) around cyber space.
I was heading for the center of Lima on my bike, and suddenly I crossed paths with an elderly couple enjoying a bicycle ride. They were both laughing, and it caught my attention. So, without thinking twice, I pursued them for what would be 3 blocks in order to capture the scene, and waited on a corner with my camera and backpack for that shot.
I published the photo on my Facebook group, Peru StreetPhotography …[and] a week later, a Ms. Anita Navarro wrote me, congratulating me for the photograph. She said she was the daughter of the woman on the bicycle.
Then, she continued to tell me the couple’s story: The man is the husband of her sister, who died 14 years ago. He was left alone with their four daughters, so Anita’s mother stepped in to help raise the girls. The man never remarried.
The family has told me the couple likes the photo and have no problems with my having posted it on social media – to the contrary, they are quite pleased. I plane to give them a copy of the photograph.

A GOOD LIFE IS WHEN YOU SMILE OFTEN, DREAM BIG, LAUGH A LOT AND REALISE HOW BLESSED YOU ARE FOR WHAT YOU HAVE

1 thought on “The not so retired retirees, Soap making, Don’t be discouraged, Useful tips and a story to make you smile”