Joining a club is a good way of getting out of the house, pursuing a hobby or idea that you haven’t been able to do when your time was limited. Your local Shire or Municipality usually puts out a booklet with a list of clubs and activities; likewise the local library has similar information. Also neighbourhood houses provide many great opportunities.

Ken has always been interested in taking video but has never had guidance in the art of producing a good end product so when a club started up recently he took the opportunity to get involved. Chatting about what his first project would be he came up with the idea of a story identifying the changes that have taken place in printing methods over the past 60 years. Ken did a 5 year apprenticeship in London as a compositor, a job no longer in existence due to the progress in technology. Here he is at the time: 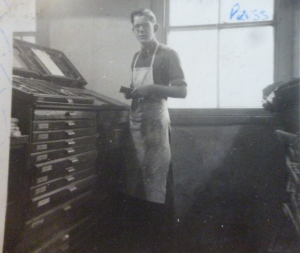 Ken as an apprentice compositor

It transpired that I mentioned Ken’s project in one of my regular e-mails to a friend in the UK, forgetting that she used to do some printing as a side-line business. From our conversations her story has emerged and I am going to share it with you now as it’s an example how our memories can be jogged, our experiences recounted, topics of conversation ignited. In this way we can enjoy our past endeavours, joys and failures from the comfort of our armchairs.

LOOKING THROUGH THE WINDOW OF MEMORIES – JOAN’S STORY 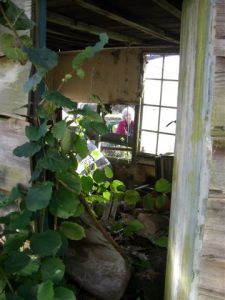 We first took up printing in 1955 because a friend in the Young Farmers Club who did the printing for them wanted to give it up so Keith and I bought his machine (Adana) and type. Keith used to go to Tring market in those days and one day he dropped into some shops saying ‘we do printing’. We received a letter from one shop asking about 5000 letterheads. Great excitement, but panic! The little Adana was no way capable of that so we decided to buy a large electric one. We went to London and looked at an Adana we had seen advertised and bought it with loads of print and trays. When we got home we re-read the letter we had received from the shop enquiring about letterheads and realised it wasn’t an order but merely asking for a quote. Glad to say we quoted and were delighted to get the order.

We installed the printer in the farm kitchen and got started. At first it went too fast for me to control. Each sheet of paper had to be taken out after printing and the next piece put in before it came down to print again. This caused panic because we weren’t quick enough so Keith adapted the speed with a different cog. The actual printing job was left to me and I soon had to have it adapted again back to normal speed. Before long another adaptation took place to make it go faster.

Our first job took hours and we made £88. That was a triumph and Keith calculated that it worked out at 6d/hour. Of course there were no wages to pay.

Eventually Keith built a special shed which was a vast improvement from having to work in the kitchen. To do this he cut down a Horse Chestnut tree for the walls and we bought new boards for the floor. When completed we invited friends to join in a party of celebration with plenty of music.

I eventually closed the business after the birth of my fifth child; there just wasn’t enough time in the day and Keith was far too busy on the farm.

Font trays as they were left when Joan terminated her business.

Recently my youngest son Grainger took me out to the shed, which stands lonely and neglected, but still has the power to bring back all those memories of hours spent working with the equipment. I was sad to see all the print trays dusty and neglected but at the same time I have enjoyed this look back into my past. Fortunately, to help me remember, I have one of the print trays on the staircase landing in my house displaying lots of trinkets. 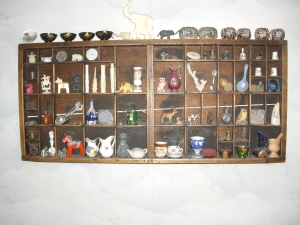 Joan and I have enjoyed e-mailing each other and chatting about her time as a Printer. I would like to thank her for sharing her memories. If anyone is interested here is a YouTube link, The Letterpress Revival. Machines are still being restored and used around the world.