For many of us gardening provides many hours of enjoyment and health giving benefits so it’s good to start thinking about Spring.  I like to start my seeds early and then plant them straight into the soil without having first to remove them from the container.  I think it avoids those early attacks from snails and slugs as the plants are more established.    Last year I bought some containers which were supposed to easily break down but they proved unsatisfactory as the roots of some plants became stunted failing to easily get through into the soil.    You just have to have a medium that breaks down otherwise you are wasting your time, so I did a bit of research  and found a tutorial on making pots for seed starting and cuttings using newspaper.  I followed the instructions but my pots didn’t come out as perfectly as shown on the tutorial.   I eventually realised that the newspaper I was using wasn’t the same size so I practiced cutting my paper until I sort of got right.  Having produced six pots, I merrily went down to the shed and planted some giant sunflower seeds, which failed last year.  Of course I’ll have to be careful when watering using a spray or the newspaper will quickly collapse.

Here’s a photo of my effort followed by the tutorial which shows the pots perfectly formed.  I wonder how long that took ! 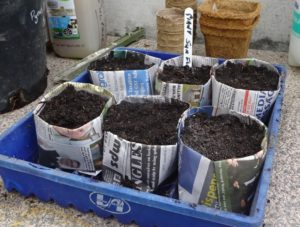 With all the terrible things happening in the world, and who knows when it could affect one of us, I have been trying to stop having a groan about various small issues which really aren’t important.   I realise that regardless of our current circumstances, there are people who would trade places in a heartbeat.  I’ve decided to make it a daily habit to feel thankful for all the good things in my life and have been following some good advice from a recent article I read which is that before I go to sleep I think about one best thing that happened during the day and say “thank you, thank you, thank you”.  It’s amazing the things I’ve been taking for granted.  Let me know what you think about this challenge.   Some readers of my blog have mentioned there is no ‘Comment’ area, but you can use the ‘Leave a Reply’ invitation at the top of the page.

An easy and so yummy snack

Thought I would share this yummy recipe with you.  Only drawback is that you can’t stop tucking in. 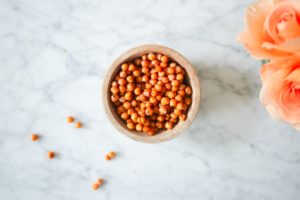 Step two: Drain your chickpeas and then rinse, dry and pop to the side.

Step three: Spread your chickpeas out onto a lined baking tray, and bake for around 40 minutes until crispy!

Step four: Pop them out of the oven and mix with your honey, cinnamon, salt and oil

Step five: Whilst still warm place back into the oven for another 5-10 minutes until golden.

Looking back and sharing special times

I originally posted this item on the 14th April 2015 and thought that I would  re-post it as there are now many more followers of the blog who may enjoy the story.  Even if you have read it before, perhaps you will revisit the experience.  So here goes:

It was a heady time filled with hard work, ambition to succeed and purchasing of equipment to create better sound quality. The group first practiced in a room adjacent to my parents house and then in our garage and later in a room at the Red Lion pub at Northchurch (UK) One of their first big opportunities came when they won a Beat Group Competition at Hemel Hempstead (UK) with the name THE ASSOCIATES. What excitement. The boys were always supported by their girlfriends who travelled around to the venues with them putting up with late nights and lots of just sitting around.

Over the years the group supported many well-known bands one of whom was Bill Hayley and the Comets at a venue in Dunstable. Once they were booked as top of the bill in Llandudno, North Wales and another time in Newmarket where their PA amp blew up. The other group performing that night were The Idle Race who allowed them to use their equipment. The lead singer and guitarist was Jeff Lynne who went on to front ELO and write their songs. He was also in the Travelling Wilburys after being producer for Tom Petty, George Harrison and Roy Orbison. Now I realise that many of my readers may not be aware of these names, but it could be of interest to some.

Though Ken and I are unable to meet up with the members of the group due to tyranny of distance, we were so happy when Alan sent a photo of a get-together they had recently at a birthday party. I wonder if you can spot which is which now, but first Ken and I toast them with this photo from those days (venue unknown).  Just look at that hair-style! 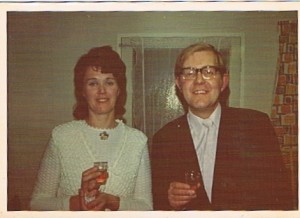 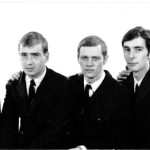 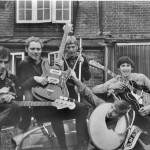 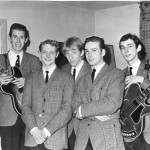 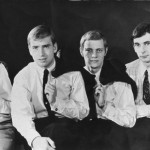 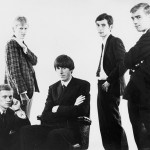 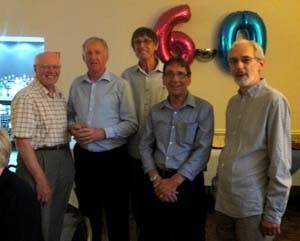 Listen to their record, Virginia Water (written by Andy)

I’ve been pursuing quite a few projects recently i.e. knitting, spinning and felting.  If you are at all interested in felting you will love visiting  http://www.rosiepink.typepad.co.uk.  I have just bought their e-book Creating Felt Artwork.  It’s truly inspiring and my fingers itch to get started.   My spinning skills are slowly improving but I think it will be a long time before the wool comes out uniform.  I was given a 1kg roll of Bendigo Mills fine merino toppings which I have been working on.  If and when that’s spun I will try to knit a cardigan but I’m not holding my breath.  My daughter asked me if I would knit her a jumper which I finished a couple of weeks ago.  I used Bendigo Mills Pattern 8290 in 8 ply with good results.  Here’s a photo: 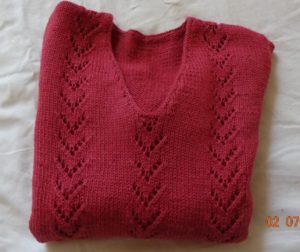