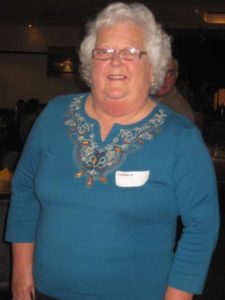 I first met Noelene last year at a Moviemakers Club Meeting and having previously been told of her interest and knowledge of cemeteries, asked if she would be able to spend some time with me chatting about her cataloging work  (as mentioned in a previous blog post).  Last week I was fortunate enough to spend three hours with Noelene during which time I was absolutely amazed by her knowledge of both cemeteries and genealogy together with many other activities with which she is involved.

I started the conversation by asking Noelene what sparked her initial interest in cemeteries.  She told me that as a child her parents went on regular picnics and during these trips they usually parked close by a cemetery and walked around.  It was not until she was on her honeymoon in Port Campbell (a coastal town in Victoria Australia) that her interest was reignited when she decided to wander around the local cemetery.  Although life was very busy during the following years, raising children, running a business with her husband and caring for other family members, she said she still took time out to wander around a cemetery.

Unfortunately her husband had a very bad car accident which left him with some disability so that’s when they decided to move from Melbourne to their present location in Inverloch a seaside town in Gippsland, Victoria.  In 1990 Noelene said she was left alone at home with her dog, the children were all at school, her husband was working part time and she felt at a loss.  After working for many years and now semi retired she asked herself  “what to do”.  She started taking an interest in the history of the local area and became involved with the starting of  Wonthaggi Genealogy in 1997 helping catalogue the resources of the area, its schools and shops.  She found that there had been 18 cemeteries which fell into three groups, Private Cemetery, Old Cemetery and current cemeteries.  Noelene studies burial registries, copies to a data base and takes photos.

Eventually she was tracked down by the Cemetery Trust Group of Melbourne and asked to provide the history of the area which she has been doing.

Noelene provided me with detailed information about her work which I found fascinating.  For example sometimes she has to walk through paddocks and rough ground to locate an old cemetery, not in summer she said for fear of snakes,  to take photos and document burial sites as shown in these photos of  of Woodside Cemetery, Yarram, South Gippsland, Victoria. 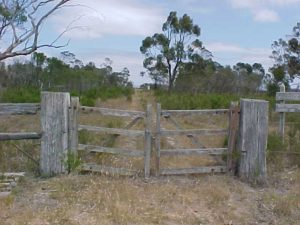 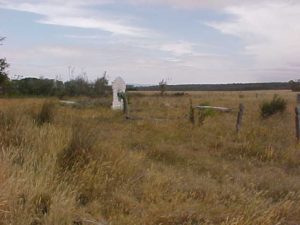 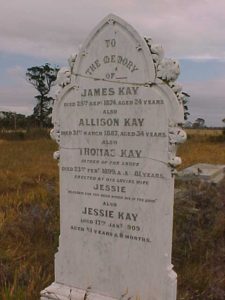 She also explained what happens in the case of a property that has family burial sites.  It is possible for the property to be sold but an area of an acre remains around the burial and is the property of the original family or their heirs.

Often there are problems locating where a person is buried or who occupies a certain grave.  She draws what is termed a ‘Mud Map’ – like this:

which is a map of the rows of graves.   She documents the plots that have names, then photographs the rows of graves following which she views the photos and compares the Burial Registry and makes comments.  Noelene says it’s like a huge jigsaw.

In addition to all this work Noelene runs workshops to help people find a relative who may have been a convict transported to Australia, continues her work documenting historical schools and is presently recording details of the history of Wonthaggi State Coalminers.  Apparently there are many photographs of these miners but no details of who they are.  A campaign is being run in the local papers to see if anyone can identify them.

If all this isn’t enough Noelene helps people with their family trees, provides a Computer Tutoring Service for 50+ age group and pursues her hobby of locating and selling collectables like salt and pepper pots, teapots and money boxes.

At 65 Noelene, who now only has one kidney and suffered ill health for a couple of months last year,  is a wonderful example of what one lady can achieve.  You can contact Noelene by e-mail if you would like to seek her help at  [email protected] 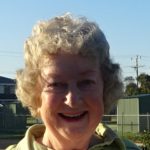 Rhonda enjoys water aerobics which is where we first met, often having a chat after class about our various activities.  A couple of weeks ago she mentioned that she was making a baby blanket as a gift for the daughter of her sister-in-law who sadly died last year without knowing she was going to be a grandmother, something she had longed for.  Rhonda also discovered, tucked away, some giraffes her sister-in-law had made and given to her for her youngest child some 40 years ago.  This sparked the idea of making these into a baby mobile for the coming baby which she has now completed 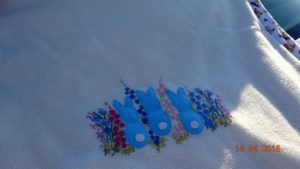 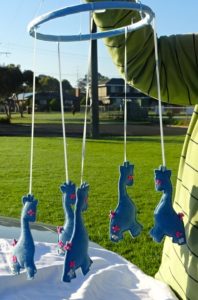 What a truly wonderful gift this mobile will be for Rhonda’s niece when she finds out her mother made these giraffes and now she has them for her baby.

Rhonda worked in the Head Office of The Embroiderers Guild of Vitoria for 18 years.  The Guild offers workshops and courses at all levels, meetings, monthly special interest sit and sew groups, exhibitions, a borrowing and reference library plus a newsletter.  All these promote the art and skills of both traditional and contemporary embroidery and textile arts.  Beginners are always welcome.  http://www.embroiderersguildvic.org

You simply won’t believe how creamy and ice cream-like this dessert is.  Recipe only works in a food processor.

Method:  Peel bananas and wrap with plastic food wrap.  Freeze for several hours.  Chop bananas into a food processor. Process until creamy, stopping and scraping down the sides occasionally, then add honey and blend through.  Serves 4.

LISTENING TO WHAT PEOPLE SAY

One of the most sincere forms of respect is actually listening to what someone has to say.

This was brought home to me the other day when I was trying to get some information and the person I was talking to had absolutely no interest in what I was trying to say.  I came away very frustrated.  Is this happening to you or do I need to upgrade my skills of communication?

I’ll be back soon