Hello everyone – once again I have a few activities and snippets of information to share.  Do feel free to write a comment on any item in ‘Leave a reply’ at the top of this blog.

Enjoying a new experience at Halloween

It’s been a long time since I gained so much enjoyment out of dressing up.  I don’t mean getting ready for a special outing but actually dressing up in costume and acting a part.   It’s not something I’m accustomed to doing and I found it a little difficult at first but I can certainly recommend it for letting yourself go.  My daughter commented when seeing the photos that she had never seen me having so much fun.

More than 4000 people attended the annual Halloween event at Coal Creek Heritage Park in Korumburra on the 29th October and myself, along with other members of the Coal Creek Spinners group, dressed up as witches and welcomed visitors into our coven. 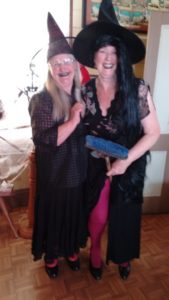 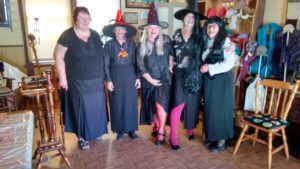 Can you believe Avis, second left, is 90 and still volunteering

Here’s another clearer photo of Avis which I thought you would like to see.  She is a marvellous lady and an inspiration to us all. 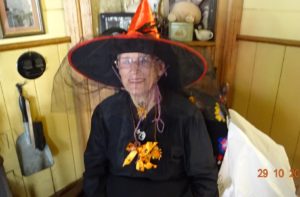 I usually do my Christmas Puddings during October but somehow this year I’m a little behind, though it probably doesn’t matter, they will still taste good on the day.  As customary Ken and I stirred the mixture and made three wishes.  I always make the same wishes which I think are supposed to be kept secret.  Being a little nostalgic I decided to look back over my Christmas pudding photos.  I find it very comforting to see I am carrying on with the same traditions as my Mum and Dad.  How well I remember them doing their puddings, except in their case they made them as gifts for those friends and family who could no longer make them so their kitchen was filled with steam for a week or more. 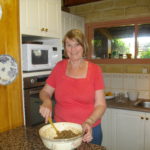 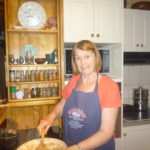 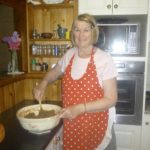 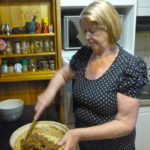 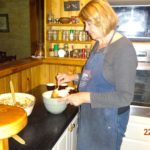 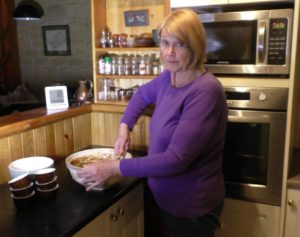 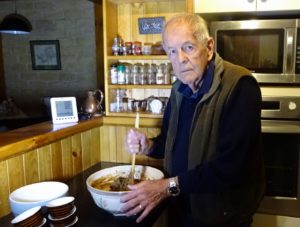 A recipe for Mincemeat (Fruit mince)

Last year I was very disappointed with the quality of the fruit mince I used for my mince pies so this year decided I would have a go at making my own.  Having gone through all my cookery books, including a Mrs. Beaton’s (too difficult), I settled on one from my favourite cookery book which was given to me as a wedding present in 1960.  I have to say it turned out really well and of course I just had to make a batch of pies which I intended to put in the freezer.  They had no chance of that did they – yum, they were so good.  If you want to try this recipe you will need: 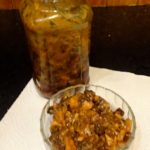 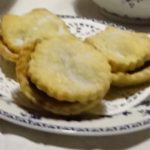 NOTE: I added some water to make the mixture a little more fluid and because I didn’t have the specified spirits to hand I used some Mezcal, a type of tequila, made from Agave nectar that we brought back from Mexico 10 years ago.  At last I found a use for it !

Some information about Agave Nectar (you may already know of course) – Agave nectar, sometimes called agave syrup, is most often produced from the Blue Agaves that thrive in the volcanic soils of Southern Mexico.  Agaves are large, spiked plants that resemble cactus but they are actually succulents similar to the familiar Aloe Vera.  They come in many sizes and colours.  The Aztecs prized the agave as a gift from the gods and used the liquid from its core to flavour foods and drinks.  Now, due to increasing awareness of its beneficial properties, it is becoming the preferred sweetener of health conscious consumers, doctors and natural food cooks alike.

The joy of spring flowers

What joy the spring flowers bring even though some of them are having a bit of a struggle coping with the very strange weather we have been experiencing.  The wind has played havoc with many plants coupled with the naughty behaviour of Ken, who in his effort to control the weeds, accidentally pulled up my very best sunflower specimen which I had been nurturing.  Admittedly it was in a strange location, amongst the loganberries, but it was the only space I had available at the time of planting.  Fortunately I have three more in another spot.  He has been forgiven – somewhat.

My Lilac was a real disappointment, only having a couple of blooms, but the various clematis and sweet peas are lovely. 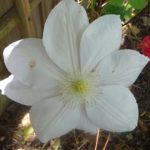 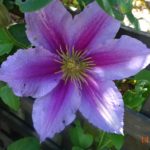 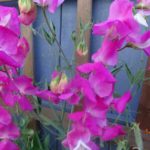 Some useful tips for using silica gel bags
Next time you find a sachet of silica gel in a handbag or in a box of new shoes, don’t throw it away – these multi-purpose little sachets have a range of practical household uses or so I have read in a recent article.  I have picked out what I think to be the best.

Apparently if you find your silica gel bags aren’t working anymore, don’t throw them away – you can dry them out by placing them in the oven on low temperature – about 95C – for one to two hours. Then keep them in a sealed sandwich bag until they’re ready for use again.

So here I am at the end of another blog post which please enjoy.  I’ll close with a quote from Aristotle:

PATIENCE IS BITTER BUT ITS FRUIT IS SWEET

2 thoughts on “Enjoying a new experience at Halloween, Christmas is approaching, Recipe for Mincemeat (fruit mince), The joy of spring flowers and 5 tips for using Silica Gel bags”