Last week we spread the celebrations of Ken’s 80th Birthday over several days, after which I have to say we were quite exhausted but very content.  We spent quite a bit of time deciding how to celebrate the big day with the family.  Our first idea was to do something really different like GoKarting.  However, on investigation of the costs i.e. in the region of $900 for 20 minutes for participation of the whole family, this idea was quickly discarded somewhat to the disappointment of the teenagers.  Ken had often wondered if his children and grandchildren knew anything about his working life as a Compositor in the printing trade, starting at age 15 as an apprentice in London, until the dimise of those skills with the advent of computer technology.   With this in mind it was decided to take the family to the Melbourne Museum of Print for a guided tour.  I have to say that this was met with groans from some as a possible boring outing.  It turned out to be a most enlightening experience for all and amazement at how technology had changed the printing trade.  You can visit the site at:  www.mmop.org.au – as well as being a museum there are teaching courses on the practice and origins of typography and they also provide a letterpress studio for typographical printmaking.  I took some photos and made them into a slide Ken is busy making a film of the day so I may be able to share that at a later date.

I bought Ken a new wedding ring.  It was a real surprise for him.  He lost his ring when building his bird aviary some years ago.  Although we searched and searched it was to no avail.  It’s probably encased in concrete in the ground. 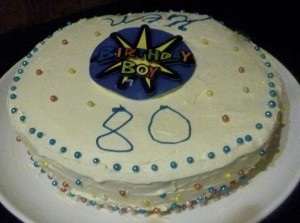 MEETING UP WITH BOB BAKEWELL

Recently I had the opportunity to have a coffee and chat with Bob Bakewell.  I was introduced to him recently through the Ken’s movie making club.  Bob is 83 and has had the most amazing and eventful life.  He shared some stories of his adventures working in Papua, New Guinea as a land surveyor in the 50’s and 60’s where he had many near death experiences at the hands of the locals including being shipwrecked when travelling between islands and spending hours in the water before being rescued.  He told me a little of the tragedies of his life.  The death of his 5 year old son at the hands of a drunk driver, the suicide of his 30 year old son who suffered from spina bifida and the light plane crash that killed his three brothers and brother in law returning from a fishing trip.  He said, with tears rolling down his face “I should have died many times, why was I spared”

Anyway I thought I would share with you one of Bob’s more fun stories as reported in his local newspaper.  This is an abridged version:

AUSTRALIA Day 2015 is one that Cowes resident Bob Bakewell will not forget in a hurry.  In fact, he is hopping mad, after a wallaby gate crashed his home.  Bob opened his door on the morning of Australia Day after hearing a knock, expecting to welcome his next door neighbour in, only to have on of Australia’s iconic national symbols in the form of a terrified wallaby go flying up the hall.  It proceeded to create mayhem throughout the house as Bob attempted to quieten it down.  He found that the the more he moved toward it, the more agitated and flighty it became. Bedside lamps, pictures, photo frames all went flying and the curtains and bed linen were all but destroyed in the ruckus.  The Phillip Island Nature Park were contacted and someone arrived to capture the wallaby.  Australia Day celebrations were put on hold as Bob set about a major clean up.  He was still at it the following day, the house unliveable that night. 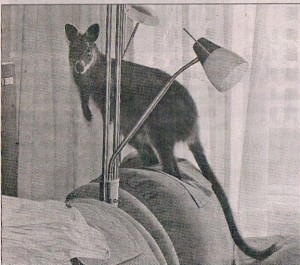 Fortunately Bob was able to take photos of the destruction in process which he forwarded to his insurance company.

Retirement is a time when we can share our stories and reminisce.  Hope to include more of Bob’s stories in the future.  He is an amazing character.

My latest project, the publication of my book A VEGETARIAN AT THE TABLE (how to mix and match a meat and vegetarian menu at the same time) has been uploaded to Amazon Kindle.  It’s been so much work as I decided to include pictures of each recipe so of course my kitchen became a production set.  I had a lot of trouble with formatting for conversion to Kindle and am still not completely happy with how that has turned out.  Fortunately you can edit your book as many times as you like so I will make some changes.  The next thing I have to do is make a video for my author page which Ken is helping me with.  That’s work in progress.  You might like to take a look at my book on my Amazon site at:  Author page

Do share any stories you may have or any ideas for Retire and Enjoy.